According to Forrester Research, a new behavior is emerging in the social space: people are using vehicles for rapid, back-and-forth discussion. While this was once confined to Twitter, it’s now being seen on Facebook in the form of status updates. These users are referred to as Conversationalists and they make up roughly a third of the online population. Here’s what else we know about this group:

Other groups that are emerging include:

Yes, these groups overlap, hence the total adds to more than 100%. Notice that the number of online consumers not using social is down to 17%, and dropping.

While We’re on the Subject of Social Media…

AdWeek is out with an article questioning the long-term legitimacy of social media agencies that are quickly sprouting across the country. As I’ve said before, great social media is no substitute for a fully integrated communication strategy, and I think this year will be a make-or-break year for the so-called experts.

Will NBC Lose Money on the Olympics?

Flash back to 2003 when NBC paid $2.2 billion for the rights to the 2010 and 2012 Olympics Games. Of course, at the time, the network assumed that it would make millions while dominating 17 consecutive nights of TV and promote its primetime lineup. Sounded like a win-win at the time, right?

Now, flash forward to 2010. The Olympics are facing stiff competition for ad revenue from the World Cup, demand is generally flagging for Olympics sponsorships, and the US doesn’t have any marquis athletes to hype, plus there’s that pesky economy. NBC Universal Sports President Dick Ebersol last week said he expected NBC to lose money on the games for the first time in memory, raising questions as to whether the struggles of sports marketing’s ultimate platform are cyclical. Couldn’t be that NBC paid too much for the broadcast rights, could it? 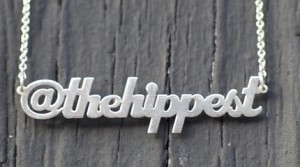 A Sweet Deal for my Readers – Just in Time for Vday

I think I’ve made it pretty clear that I’m in love with nameplate necklaces that spell out various social network ID’s. Now, you, too, can proudly declare your geek status at the next tweetup, thanks to my new friends at Survival of the Hippest. As a special deal for my readers, they’re offering 10% off of your order if you use this link.